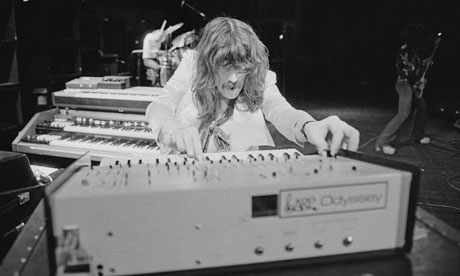 English rocker Jon Lord, who founded Deep Purple and co-wrote their most famous song, Smoke On The Water, has died aged 71.
The Leicester-born keyboard player, who had pancreatic cancer, died in London on Monday.
A statement on his website said he had passed "from Darkness to Light", and that he was "surrounded by his loving family" when he died.

Last year, Lord told fans he was "fighting cancer and will therefore be taking a break from performing while getting the treatment and cure".
In a message on his website dated 9 August, 2011, he added:
"I shall of course be continuing to write music – in my world it just has to be part of the therapy – and I fully expect to be back in good shape next year."

Lord started playing the piano in his family home and took classical music lessons before turning to jazz and rock'n'roll.
He moved to London at 19 to go to drama school, but was soon playing piano in pubs and bars and in 1964 joined cult blues band the Artwoods – formed by Ronnie Wood's brother Art.
The band were critical favourites but never translated that into commercial success and split up.
Lord then went on tour with manufactured psychedelic pop combo the Flowerpot Men, who had scored a hit with Let's Go To San Francisco, before joining Deep Purple in 1968.

The heavy rockers sold more than 100m albums – many featuring Lord's classically inspired keyboards.
But their most famous song was the simple Smoke On The Water with its trademark riff.
The band split in 1976 and Lord joined bandmate Ian Paice in Paice Ashton Lord before playing with Whitesnake and a reformed Deep Purple.

Sweet child in time, you'll see the line
Line that's drawn between the Good and the Bad
See the blind man, he's shooting at the world
Bullets flying, ooh taking toll
If you've been bad - Oh Lord I bet you have
And you've not been hit oh by flying lead
You'd better close your eyes, you'd better bow your head
Wait for the ricochet
.
.